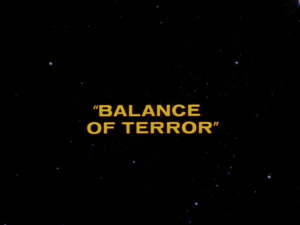 Mouldy: This is, in my opinion the very best episode of Star Trek, all series combined
Mouldy: It works on so many levels

Mouldy: The ship really looks like a space ship
Mouldy: not a cruise liner

Mouldy: Check out the noir lighting on Kirks face behind the altar

Painted: And look at the SIZE of that camera

Painted: Maybe it is holographic

Mouldy: Jumps right to it too, no stupid Captain’s Log preamble

Mouldy: Yep. TNG really missed a lot of the “sense of wonder” of the original series

Mouldy: There is a lot of canon set in the episode as well

Painted: Warp 6, the maximum the Enterprise can do

Mouldy: Yep. It took time to get places, and communications did too
Mouldy: Even this info dump is pretty well handled

Painted: Indeed
Painted: It lends a gravitas to what they’re doing

Mouldy: Yep. Like I said, this episode is so well written

Painted: I do find the fact that the whole treaty was negotiated without any face-to-face, so the Federation doesn’t know whatsoever they look like, a bit far-fetched.

Mouldy: And TOS is more military than TNG as well

Painted: At the very least there should have been some* bodies

Painted: They have sensors

Painted: They should* know where the battles were too >.>
Painted: Since they were involved in said battles

Mouldy: Could have been fought like The Forever War where everything happens at relativistic velocities and any debris would be scattered very widely indeed.

Mouldy: limits of the budget, but they do a good job in this episode

Mouldy: There is no way you would have people so close to that kind of energy discharge

Mouldy: I am really digging the noir feel of the lighting and closeups

Painted: Yeah I recall David Gerrold saying how he was really impressed with that specific lighting technique when he was writing for Trek

Mouldy: After the distruction of the last outpost we get a very taunt little submarine movie

Mouldy: For the time this showed, this kind of science fiction would be very appealing

Painted: It gave me that “submarine film” feeling when all the sections reported status green earlier

Mouldy: Wiki says that the writers deliberately based it off of a couple of 1950s submarine movies [editor’s note: Memory Alpha reports that the script writer Paul Schneider specifically based this episode on the 1957 film The Enemy Below and probably the 1955 novel Run Silent, Run Deep]

Painted: It’s a good job of it, indeed

Mouldy: This kind of story would really pull in a big audience for the time
Mouldy: It’s really appealing

Painted: Mr. Styles is an unusual archetype for star trek- The Racist

Mouldy: Again a great foot in the door for science fiction to come in, this episode really addresses a lot of the contemporary social concerns of the time

Painted: They detect a signal, and get a bridge image?
Painted: Mark Leonard!
Painted: He IS Spock’s father, after all

Mouldy: The actor playing the Romulan Captain (Mark Leonard) is in like 8 episodes of Star Trek overall

Mouldy: And then there is the racism, this episode really addresses a lot of the Zeitgeist
Mouldy: Ok, so some bits are contrived

Painted: It hits a lot of buttons, but in a way that is believable
Painted: I have always found the Romulan/Vulcan ancient split of races was a little improbable

Mouldy: Sure, but they do handle well even in TNG
Mouldy: And I like the Romulans

Painted: This episode also helps establish Kirk as a badass captain
Painted: I like TOS Romulans, TNG.. not so much

Mouldy: Yes
Mouldy: This Romulan Captain is a moral man, and a loyal soldier

Painted: Indeed, and it also indicates the Romulan society is a pretty safe place politically
Painted: Since he can say these things out loud

Mouldy: And here’s another info dump which reveals the nature of the Romulan weapon. Also well written

Painted: It shows why the Romulans are emboldened to attack and violate the treaty- that and the cloak

Painted: Good old McCoy, the conscience of the Enterprise

Mouldy: You also have sound advice from the crew
Mouldy: Even if this Lieutenant is a blowhard

Painted: Not quite Red October, the Enterprise is a Destroyer, not a sub
Painted: No cloak = No dive

Mouldy: Well, yes, a subversion if you will

Mouldy: And now we see why he is Captain Kirk, Pine just couldn’t pull this off

Painted: Agreed
Painted: “They really packed ’em in in these old ships”

Mouldy: Yep, there’s like 400 crew on the Enterprise at this time

Mouldy: And now we see that the Romulan is at least as good as Kirk
Painted: And now Kirk knows he has a formidable opponent too

Painted: The Enterprise firing blindly, an analogue to depth charges

Mouldy: Ok, so that line needs to be better written

Mouldy: Yes, a bit melodramatic but it is noir as well

Painted: And Spock figures out which tube burned out

Mouldy: Look at that shot
Mouldy: The lighting is great

Mouldy: That is great that little look
Mouldy: Great piece of acting business

Painted: Spock going “So who’s #2 on this boat, that’s right, the Vulcan”
Painted: Ah, yes, first season phasers that look like photon torpedoes
Painted: …and Kirk does what must be done

Mouldy: Yep. At this point in the show, they have that effect for phasers

Painted: /nostalga
Painted: I do think the Romulan helmets are a little goofy
Painted: See, they’re just tossing bodies around for tactics, doing the flotsam bit, adding a body to make it realistic

Mouldy: Even the bad guys are written well

Painted: The whole episode is

Painted: Silent running
Painted: I love the thought of a chase with warp ships that just parks for over 9 hours
Painted: It’s great for tension

Painted: As I said before, McCoy is the conscience this episode

Mouldy: Yes I agree about McCoy
Mouldy: 9 hours 47 minutes
Mouldy: Only 3 mllion earth like planets in the galaxy, the science is outdated

Painted: Perhaps they define it more narrowly; intellegent life supporting, or something…

Mouldy: Even then it’s low
Mouldy: According to the latest estimates

Painted: …and Spock “drops a wrench”, making them detectable on sonar. Quite unbelievable for Spock…

Mouldy: Yes, but I think the writer wanted to have a bit of frission going on in the audience as well. Maybe Spock really is a Romulan spy… Doesn’t excuse the ineptness of the act. Someone else should have “dropped the wrench”

Mouldy: The close-ups get tighter and the lighting more dramatic as the tension builds as well

Mouldy: Yep
Mouldy: And Uhura gets the navigation station

Painted: And Sulu gives her “the look” 😛

Mouldy: She is bridge crew after all, she would need to know how to do it

Painted: …and an appeal to honour spurs the Romulan Captain into action

Mouldy: Yeah, he knows that if he doesn’t he can’t really go back

Painted: “Coolant leak! Bridge, we have a coolant leak in the engine core!”
Painted: /Geordy

Painted: Coolant in Trek must be like hydrazine or something, fantastically deadly
Painted: It is in B5 too

Mouldy: I would have to look up what the coolant does to people, but it can’t be good. If I recall correctly, in First Contact it dissolves organics.

Painted: Right, absolutely. That had slipped my mind, or I had repressed the memory…

Painted: I do like that they communicate at the end, the reaching out

Mouldy: There is no way he could let the Federation get the cloak

Painted: True
Painted: Mr. Styles: “…and I realize now that my racism was foolish!”

Painted: And Starfleet chimes in, after the crisis passes- classic war film

Mouldy: Yep
Mouldy: Well over 9 hours to get a response, you never get the feeling that space is that vast in TNG

Mouldy: In most cases yes

Painted: TNG would have cut to credits after the Romulan self destructed

Mouldy: And the rapprochement between the Trinity is almost always awesome

Painted: LOL McCoy, Spock, Kirk, the Trinity, never thought of that name for them

Mouldy: Always some barb going one way or another

Painted: All right, I’m more than willing to acknowledge that’s a great episode, but I’m not convinced it’s #1 overall

Mouldy: I think what puts it at the top of the board is that it is good 1960’s science fiction from an academic point of view

Painted: It is a deep, well produced episode, one that has good pacing, acting, and overall presentation

Mouldy: And the tightness of the script, and the blocking/lighting is really appealing too

Painted: We’re judging it relative to Trek, not in the larger scope of 1960’s science fiction

Mouldy: I will write up a more solid argument shortly, couple of paragraphs. I’ll put it up as a link for those who are interested

Painted: I understand where you’re coming from but I think I’ll be able to find an episode or two that beat it
Painted: However
Painted: It clearly goes near the top of our board, no argument