Pretty much every science fiction space ship in one place, to scale. I’m impressed, not just by how many ships the artist has managed to cram in there, but that he has some very obscure starships. There’s the Wayland-Yutani ore hauler/factory from Alien, First Ones ships from Babylon 5, the USS Saratoga from Space Above and Beyond, the USS Cygnus from The Black Hole, the Red Dwarf and even the Valley Forge from Silent Running. 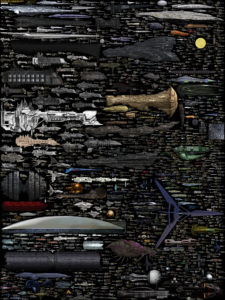 What really amazes me is just how small even a Constitution Class starship like the Star Trek original series Enterprise is compared to some the mind boggling huge ships imagined. Some of these ships, though, are too large and defy physics.

Still, it’s a impressive work of art. Hats off.

You’ll need to head over to DirkLeochel’s devaintART site and download it to get a good look. Zooming in on a webpage does this chart no justice at all.